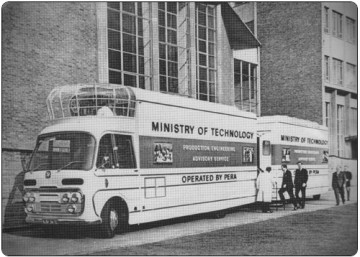 AT YOUR SERVICE
A £1 MILLION advisory service to take modern production engineering know-how to firms all over the country has been launched by the Ministry of Technology. The service will run for five years and is operated for the Ministry by the Production Engineering Research Association. Seven new mobile cinemas, based on 216 in.wheelbase SB passenger chassis, and towing demonstration trailers, will visit about 1000 firms each year.
Films and illustrated talks dealing with new and improved production techniques are presented in the cinemas, and additional demonstrations of the practical and financial advantages of the new methods are given in the trailers with the aid of displays and models. The units will visit any engineering firm wanting to know how new and improved production techniques can cut their manufacturing costs and raise output.
Each unit is manned by senior production engineers who advise the firms they visit on the introduction of new techniques. On average a unit remains at a firm for 1 1/2 days. Many of the techniques covered by the service have been developed during the course of research in PERA’s laboratories and workshops at Melton Mowbray, Leicestershire.
The towing vehicles are built by Coventry Steel Caravans, with the cab fronts supplied by Plaxtons of Scarborough. Mounted on the top of each cab is a steel-framed perspex dome which houses the film projection equipment. This is fully divided off from the cinema, which is equipped to seat 28 people in luxury coach seating. The cinema’s floor is stepped to ensure clear viewing of the screen at the rear of the unit. Other features include fluorescent lighting, inter-communication equipment between thre lecturer and projection dome, and remote control of the projection equipment. The bodywork is constructed from patent interlocking extruded aluminium sections.
Coventry Steel Caravans are also building the demonstration units, which are based on a four-wheeled chassis with turnable steering. Body construction is similar to that of the towing vehicle. Each interior is equipped with display cases around the walls, high-level colour transparency cabinets and an island demonstration table. It is centrally heated and has a fan-powered extraction system.
When set up for operation the two units are linked together with a hinged annexe forming an entrance lobby with access from either side. Steps are provided for use at enrances and exits and are stored in the spacious under-floor lockers together with spare wheels, tools, batteries, electrical equipment, etc. The units are normally connected to a mains electrical supply but when this is not possible a 12 KVA portable generator is used. 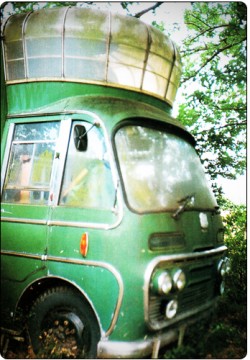 ‘Bizzare Bedfords’ – by Mike Knowles, published in the Bedford Owners Club Magazine.
(or how I chanced upon some wonderfully bodied surviving vehicles)

From time to time I have to drive from Southend to Chelmsford by way of the Retendon Turnpike up to the A12. For at least 15 years now (and probably much more) I have noticed an apparently abandoned Bedford parked up beside a cottage next to a Porsche dealer on this busy stretch of oad. No big deal you might think, and neither did I until I chanced upon an article in a 1967 issue of Bedford Transport News. It certainly looked the same lorry but was it? Camera and notebook in hand I set off to find out. By good fortune the property next door to where the Bedford had been parked was empty and For Sale so I poked around and generally busied myself before anyone turned up and ushered me away. In fact no one came along and despite the undergrowth I got several snaps of this unusual Bedford. It IS the same one as in the story opposite, KJU 267E (minus the trailer) and she has been painted Sherwood green which blends in with her rural surroundings! Amazingly the lorry is in quite good condition although the cab is full of clutter. It would not take much effort to pull herout with a heavy recovvery vehicle. I guess her future is uncertain as the owner of the bungalow seems not to want it. What I think is a pre-war Ford coach lies alongside under a tarpaulin. If any members want further details of where to find this mobile cinema I can supply details. More unusual stories next time.